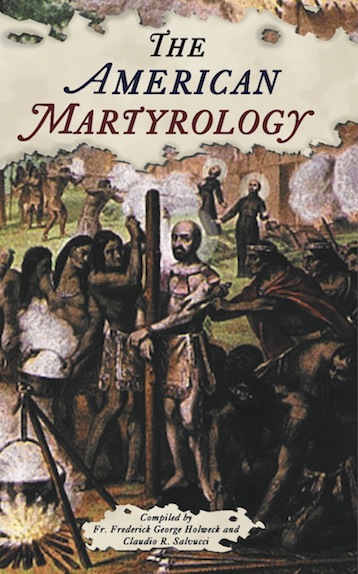 A one-time price of $17.95 will be added to your order.
4 Left in Stock
Categories: Americana, Devotional, Saints, Divine Office
Manufacturer: Arx Publishing

Most American Catholics are familiar with St. Katharine Drexel, St. John Neumann, St. Kateri Tekakwitha and Ven. Fulton Sheen. But how many have heard of Bl. Lucas Tristany? Or Ven. Solanus Casey? Or Ven. Theresa Dudzik? Or Servant of God Gwen Coniker? The American Martyrology helps the faithful recall the heroic lives and deaths of dozens of men and women of God with strong connections to the United States. Arranged in calendar form, the Martyrology is, in effect, a catalog of national sanctity which assists the faithful to remember those who have died with a reputation for holiness and encourages us to “private devotion toward the Servant of God and the spontaneous spreading of his reputation of holiness or martyrdom and of intercessory power.” [Sanctorum Mater, Art. 117].

In the days of the ancient persecutions, local Christians kept the memories of the faithful who suffered and died for Christ. These local records were eventually combined to form general martyrologies—the most famous of which, the Roman Martyrology, is used to this day as an official liturgical book. But the need for local lists never quite faded, and Father Frederick George Holweck (1856-1927), one of America’s foremost church historians and hagiographers, was the first to publish such a calendar for the United States over 90 years ago.

The new 2015 edition of The American Martyrology features all the Saints, Blesseds, Venerables, Servants of God, and reputed martyrs honored in the U.S. throughout the year. It dramatically expands Holweck’s compilation with the dozens of new saints and causes added since then, including not only feasts of the national calendar but also those of the traditional Roman calendar such as St. Valentine and St. Christopher and those of the Ordinariate calendar such as St. Alban, St. Columba, and the English martyrs.

Keep this volume handy for quick reference, or read the entries with the included prayers as a daily devotion to honor the saints throughout the year.

With rubrics adapted from the traditional office of Prime, and featuring extra prayers for the annual commemoration of family members and loved ones, The American Martyrology is not merely an invaluable historical collection but a wonderful devotional text and a perfect way to help live the liturgical year at home.