Annual Narrative of the Mission of the Sault 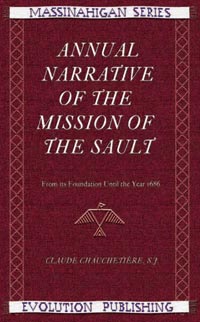 The Annual Narrative of the Mission of the Sault

From Its Foundation Until the Year 1686

Chauchetiere was a French Jesuit who penned this fascinating year-by-year chronicle of the famous Native American mission which drew converts from over 20 tribes. The Sault was the home of Blessed Kateri Tekakwitha, the beloved Mohawk-Algonquin woman who is a candidate for sainthood in the Catholic Church. Drawing from the writings of his fellow missionaries as well as his own personal knowledge, Chauchetiere begins with the mission's founding at La Prairie in 1667 by Catherine Gandeaktena, an Erie convert known as the Mother of the Poor.
As Christian Iroquois fled persecution in their homeland, the mission swelled to become "the asylum of those who wished sincerely to pray to God". Yet even with "the forces of hell unchained against the mission" —unscrupulous liquor dealers, dissolute women, hostile French governors and Iroquois pagans—the Sault's Christian faith remained unshaken, and survived to become the nucleus of an authentically Native Church, throughout Canada and the northern United States.