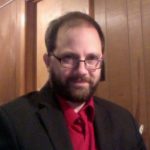 Language in New Jersey: A History in Documents

The Savanna Jargon: A Remnant of the Lost Erie Language?

The Roman Rite in the Algonquian and Iroquoian Missions (2008)

Grammar of the Philadelphia Dialect (1995)

My research on American dialects began around mid-1994. At the time I was studying Italian dialects, and was particularly fascinated in their written traditions, particularly their use in poetry and music. Neapolitan is not simply objects of scientific curiosity but is part of the cultural folk heritage of the region—a heritage that is known, appreciated, and participated in by Neapolitan speakers.

With this model in mind, I began to develop a standard orthography for my own native Philadelphia dialect, which I have continued to revise in publications and working papers since then. Orthography means, simply, a standardized way of writing a language. My idea was to give Philadelphians a way to write their own dialect.

A few linguists, sad to say, never quite “got” what I was doing, mischaracterizing it as eye-dialect. (And I have noticed the same thing happen to Pittsburghese.) Unfortunately there is an inordinate hostility to literary dialect among some Americans, a hostility that is quite out of step with the rest of the world and of our own history. Not only the dialect novels of the 19th century but also academic journals like Dialect Notes used to make frequent use of the very same orthographic conventions that some linguists now criticize.

So in addition to tackling more traditional subjects (e.g. dialect geography) my research in dialectology has tended to focus a great deal on the traditions of American dialect orthography and helping thereby to bridge the gap between the academic and popular treatments of the subject.

As far back as I can remember I have been enamored with the Lenape place-names of the Philadelphia area: Poquessing, Pennypack, Neshaminy, Wissahickon. To this day whenever we drive anywhere–and much to the annoyance of anyone riding with me–I almost feel compelled to sound out the native place names that we pass along the way.

What started as a childhood interest began to take a scholarly shape at my alma mater of Haverford College, where for the first time I had access to an academic library. Gradually my particular area of interest narrowed to early vocabularies and texts of  East Coast languages, particularly Eastern Algonquian and Northern Iroquoian. While these texts are not up to modern scientific standards, they are often the only record that exist of languages like Nanticoke and Susquehannock. But even in the case of a well-studied language like Lenape/Delaware, which survived well into the 20th century, the earliest records still provide irreplaceable evidence of the language’s historic characteristics at contact and its dialect geography within its native homeland. With the American Language Reprint series (1996-2009)  I aimed to make these vocabularies easier to study, fill in some historical and author context, and apply some textual criticism to the vocabularies to ensure the most complete and accurate data set. I even digitized the texts and developed an interactive linguistic atlas that enabled researchers to see linguistic data in its geographical context.

Currently, my studies have moved away from academic research per se into a couple of tangential areas. First is the Algonquian and Iroquoian liturgical uses of the Catholic Church, some of which are now hard to decipher and require a knowledge of historic vocabularies. Secondly, I have been parlaying my studies into constructed languages for a fantasy trilogy I am developing in a Christianized North America. These are imaginative reformulations of pidginized Algonquian and Iroquoian languages, and I have even been working on a hieroglyphic system based on native pictographs but tailored to Algonquian grammar.

In a few areas I’ve tried to offer plausible solutions to minor scholarly mysteries, such as:

What was the original native language(s) of Western Pennsylvania?