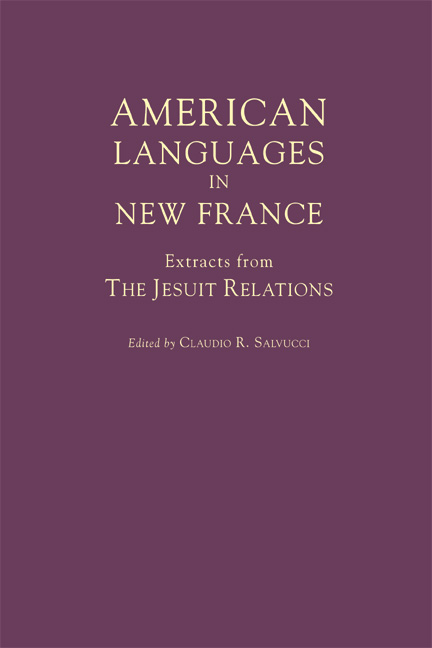 "[Includes] an excellent introduction to the linguistic situation in the region during the 17th century.... The extracts tell us much about the languages and customs of the Native Americans. ...American Languages in New France is a fascinating book for anyone interested in Native American languages and is also an invaluable tool for historical linguists, anthropologists, and ethnologists."

This volume collects valuable fragments of linguistic data and accounts of Native language as used among the Algonquian and Iroquoian tribes of New France. Volume 1 documents not only observations on the languages themselves, but also on the mutual intelligibility and geographical extent of various dialects, the various pidgins and jargons which came into use as a result of cultural contact, and the use of European languages such as French and Basque in native North America.
This volume also includes several extended tracts in various Native American languages, including Brébeuf's 1636 description of Huron grammar, Lalemant's interlinear translation of a Huron prayer, Vimont's letter in Algonquin, Le Jeune's description of Montagnais, and many others. A map showing the location of the various missions and the approximate distributions of the Native languages is also included, as well as three useful appendices:

Appendix A - A Native language concordance of the nearly 1,600 Native terms mentioned in the volume;
Appendix B - A chart which assembles the various observations about linguistic relationships found in the extracts and compares them with a modern classification.
Appendix C - Nearly 100 brief biographies from the Thwaites edition of the Jesuits mentioned most prominently in the extracts.