Claudio Salvucci is the founder of Evolution Publishing, where he served as editor and compiler of the American Language Reprint series (1996-2007), the Annals of Colonial North America series (2002-2005), and the ALR Supplement series (2008-2013),  specializing in historic Algonquian and Iroquoian vocabularies and texts. After discovering the Indian Masses and finding they were almost unknown in liturgical and Catholic circles, he devoted himself to studying them and promoting them via his book The Roman Rite in the Algonquian and Iroquoian Missions and via articles in Latin Mass Magazine, New Liturgical Movement, and Liturgical Arts Journal. He founded Ancilla Press in 2015 to publish devotional books and to revitalize American Catholicism through its own native traditions. In 2020 he was asked to be Communications Director for the North American Province of the Priestly Fraternity of St. Peter; there he continues to study the Roman liturgy while editing the Meménto newsletter, the Missive blog, and the yearly calendar and Ordo.

A liturgical project aiming to preserve the Indian Masses

of the Native American Missions

During the 1600s, French Catholic missionaries adapted the traditional Latin Mass to the Indian missions that they served. At first, they translated common hymns and prayers into native languages for the Indians to sing during Mass. But over the following centuries, as missionaries learned the languages better and the native scholae learned more of the official chants of the church, there developed full-fledged American Indian liturgical uses. These “Indian Masses” were based on the traditional Roman Missal but featured vernacular ordinary chants like the Kyrie, Gloria, Credo, Sanctus, and Agnus Dei, and even some of the propers like the Introit, Gradual, and Alleluias.
These unique liturgies were first preserved only in treasured manuscripts handed down from one missionary to the next. Later, by the mid-1800s, a number of these manuscripts were collated and printed in paroissiens (parish-books) for the benefit of the mission Indians in the pews and in the choir lofts. However, they went almost forgotten in the liturgically turbulent years after Vatican II.

Historically, these Masses were all quite specific to certain missions and populations. Some of these communities are not even intact anymore, and even the surviving Native communities have experienced an acute loss of linguistic heritage over the last century.
To properly preserve these liturgies and make them more available, a solution had to be found that was both respectful of each mission’s Mass as an individual entity as well as universal enough to serve the wider Catholic Church throughout Canada and the United States.

The Gradual of the Seven Nations

The Gradual of the Seven Nations is, I hope, the solution to those difficulties. The Graduale is an already recognized liturgical book in the Roman Rite. Quoting the old Catholic Encyclopedia from 1918:

The name Gradual (Graduale Romanum) is also used for the book that contains the music sung by the choir at Mass. The name comes from this most important chant, but the book contains the plain-song music for the Ordinary…and all the Propers for the year.

As a liturgical book specifically for the choir, the Gradual is thus most suitable type of book for the Indian Masses. No separate Missal is necessary because the priest at an Indian Mass uses the same Missale Romanum that is in general use elsewhere.
The inclusion of all the different uses together in one Gradual will enable the Gradual of the Seven Nations to be used not only for a complete cycle of year-round Masses by historic missions such as Kahnawake and Odanak, but also for the occasional Indian Mass on feasts, celebrations, and gatherings of Native American interest. This combination of local and universal should make it particularly adaptable and well suited to preserve these liturgies into posterity.

Ancilla Press hopes to eventually publish the Gradual of the Seven Nations as a full-fledged deluxe liturgical edition that befits its service in the Holy Sacrifice of the Mass. But at present we are still in the early stages of compilation.

Our first task is to collect and clean up all the relevant chants and then lay them out in a way that is accessible to modern choirs. Some amount of rearrangement of the originals will be necessary, and in a few cases where only manuscripts of the Masses exist, these will need to be typeset.

We have decided to progress through each of the various liturgies one at a time, and then retain these as chapters in the final Gradual.

How You Can Help

To raise money for the project, Ancilla Press will be making each different use available in spiral-bound editions suitable for choir use.

First to be published is the Use of Kanesatake, which you can read more about in an article of mine for Liturgical Arts Journal. Though a quite archaic and rather simple liturgy, with only a handful of Introits and Mass settings, the Kanesatake Use can be used for a wide array of seasonal and common Masses.

Another way to help is to offer your spiritual support, particularly prayers for the successful conclusion of the project and the restoration of the Indian Mass to North American Catholicism. 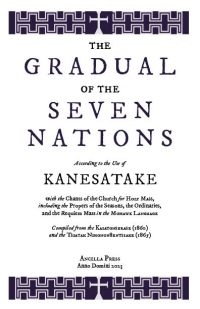 This year of 2023 marks the 350th anniversary of the death of Catherine Gandeaktena, who is in many ways the patroness of this project. Before she died in the odor of sanctity on November 6th 1673, she had co-founded the mission of St. Francis Xavier in Kahnawake and forged a devout Catholic community out of converts from 20 different nations. Kahnawake would become the home and final resting place of St. Kateri Tekakwitha, and the capital of the Catholic confederacy known as the Seven Indian Nations of Canada. Its liturgical tradition was the most highly developed of all the missions, so it will have the honor of being the very first section in the Gradual of the Seven Nations.