Exactly three hundred and forty-eight years ago at the town of La Prairie, Quebec, a woman died in the odor of sanctity. Her name was Catherine Gandeaktena.

Born into the Erie tribe, she was captured in war by the Oneida around 1654 and adopted into the Iroquois culture. She married a Christian Huron, and when the Jesuits came to the village in the 1660s, she became fascinated with the Catholic faith. She was eventually baptized in Quebec and, with her husband, helped found the mission of La Prairie–better known today as the Mohawk reservation of Kahnawake.

Catherine Gandeaktena is one of our patrons here, as someone who represents the ideal of inculturation. We are told, in Chauchetiere’s entry for 1671 in his brief history of the mission, that the Christian Iroquois who assembled at La Prairie brought their ancient system of government with them, removing “only what vice had spoiled in the old Iroquois villages.” 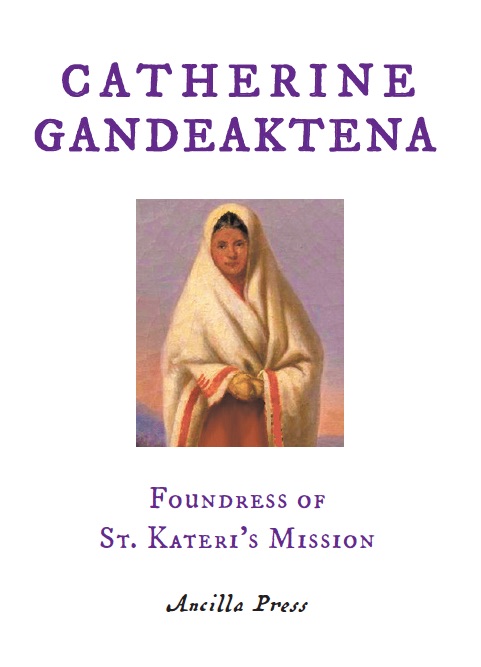 Catherine Gandeaktena died a holy death in 1673–“in the odor of sanctity” and with the French and the Indians both contending over the honor of her mortal remains. Only a few years later another Catherine surnamed Tekakwitha would move to the mission and become renowned as St. Kateri, the “Lily of the Mohawks.” In fact, we know Gandeaktena’s story mainly from accounts written by St. Kateri’s biographers–so even though they never met, the two women are inextricably linked.

This, of course, is a microcosm of what we must do in our own lives. We root out that which vice has spoiled, and as we do so, we become more ourselves, more of what we ought to be.

Through the example of her and her husband, the mission became the capital of a new kind of Iroquois civilization–one governed by Christ and the Church.

Many of us will hear that fact wistfully in 2021. We look at our own society and realize there is much to be gravely disappointed about in today’s America. The nation we love has become obviously and quite literally hell-bent.

For the patriot, it is painful.

But it is no pain that hasn’t happened before. As Augustine sighed over Rome in the 400s, as Catherine Gandeaktena must have sighed over the drunkenness and murders that gripped Oneida in the late 1660s, we too must weep over the dissolution and degradation of our motherland.

And like Augustine, like Catherine, we know that the Church holds the answer. Kingdoms come and go, but the King of Kings remains.

We just need to learn to rebuild our culture on a firm foundation: the God-man whom death could not contain, the divine hero who knew the way out of the grave.

The aspirations of the Declaration can’t save us. The Constitution is in antinomian tatters. The corrupt America is dying. Nothing earthly can save it now. And we can be at peace with that, because her failure is teaching us a lesson we all needed to learn.

A sought-for permanence, our perfection, our salvation can come only through Christ. America can’t save the world. America never could. But Christ can. And only in Christ and through Christ was America worth anything to begin with. Our ancestors saw Christ prefigured in pagan Rome, like Vergil’s Fourth Eclogue and in the Sibylline Books. We too will begin to see how the best of America pointed directly or indirectly to his Reign.

Closer to home, I also think about the Elm of Shackamaxon, under whose shade, legend has it, William Penn signed the Great Treaty with Tamanend and the other Lenape sachems. That great elm had a mystical significance to the early residents of Philadelphia. And when it finally succumbed to a storm in 1810, people came to pick up pieces of it as souvenirs and made heirlooms from its wood. Some even were more ambitious–they cut from the dying tree little scions, and planted those descendants around the Delaware Valley, where you can find them even today. I practically slept in the shadow of one of them during my freshman year of college.

There’s a parable in that elm for us today.

America, yes, lies dying and torn apart. But everything we remember in it that was any good, every bit of cultural virtue is like a seedling or scion of the original. We teach these treasures to our children and grandchildren, who are the new soil in which these seedlings take root.

Christ offers us the power to live forever in his mystical body, so by His power working through us, America will live forever.

Don’t worry so much about her earthly fall. Grieve as is natural, but also prepare to encounter her all the more radiant in heaven (hoquessing).

Catherine of the Erie, foundress of La Prairie, pray for us!