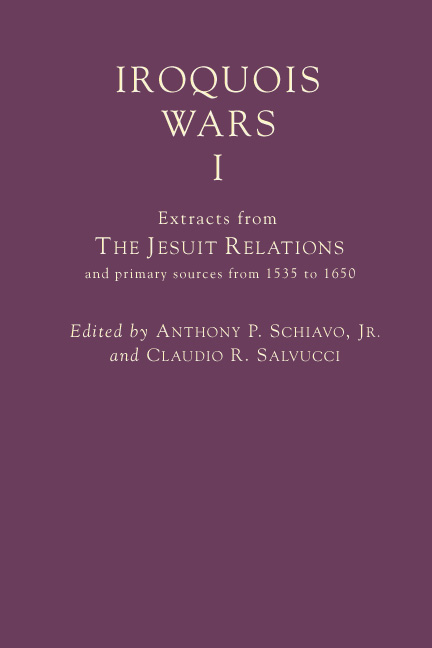 Extracts from the Jesuit Relations and Primary Sources 1535–1650

This volume chronicles the phenomenal rise of the Iroquois Confederacy during the "Beaver Wars" of the 17th century. In what were perhaps the greatest series of military conquests in Native American history, the Five Nations of the Iroquois (the Mohawks, Oneidas, Onondagas, Cayugas, and Senecas) subjugated, destroyed, and absorbed enemy tribes stretching over a vast area from eastern Canada to Virginia to Illinois--forever changing the cultural map of eastern North America.
In this volume, particular attention is given to the wars between the Iroquois and the Hurons, Algonquins and Montagnais that climaxed in total victory for the Iroquois in 1650. The accounts included in this volume cover the underpinnings of the wars and the battles, raids, and skirmishes up to and including the collapse of the Hurons. They are taken from the Jesuit Relations, the writings of Jacques Cartier, Samuel de Champlain, and Fr. Gabriel Sagard. During this period, the Iroquois emerged as a dominant force that was both respected and dreaded by neighboring tribes and the European colonial powers alike. Additional extracts touch upon the evolution of fighting techniques among the eastern woodland tribes, strategy and tactics, the treatment of war captives, the influence of European trade, war rituals, and peace negotiations.
An introduction written by the editors helps place the extracts in their historical context and provides a list of further reading material. Each individual extract is properly cited for easy referencing within the original source material, allowing the book to be used as a companion to the early sources or as a stand-alone reference. Three illustrations and five original campaign maps are provided, as well as three helpful appendices:

Appendix A - A detailed chronology of events from 1533–1650;
Appendix B - A synonymy of obscure tribal names contained in the volume;
Appendix C - Nearly 50 brief biographies of individuals (explorers, native chiefs, and
missionaries) mentioned prominently in the extracts.