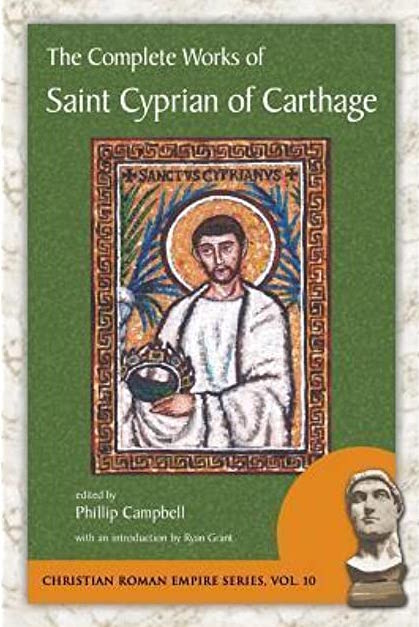 Born about the year AD 200, Thascus Caecillius Cyprianus was the scion of an ancient and noble Roman family living in North Africa. A convert to Christianity in mid-life, Cyprian was acclaimed bishop of Carthage during a time of intense Empire-wide persecution by the Roman imperial authorities under the emperor Decius. In the twelve year span between his conversion and his martyrdom in AD 258 during the reign of Valerian, Cyprian wrote some of the most important foundational documents of the ante-Nicene Church.
This volume contains the entirety of Saint Cyprian's writing--13 treatises and all of his correspondence, 82 letters in all. It also includes "The Life and Passion of Saint Cyprian" by his companion, Pontius the Deacon, as well as the minutes of the Seventh Council of Carthage over which Cyprian presided. His writings encompass the major issues of his day including the Roman persecutions, the unity of the Church, dealing with those who renounced the faith under threat from the state (the lapsi), the Novatian heresy and the rebaptism controversy. His correspondents included the most illustrious men of the early Latin Church, including three Popes--Cornelius, Stephen I, and Sixtus II.
Read and cited frequently by theologians down through the ages, Saint Cyprian's writings are of surpassing authority and were considered works of genius "brighter than the sun" by Saint Jerome. Aside from their obvious ecclesiastical import, the works of Cyprian also offer a detailed and unique glimpse into Roman society at the height of the anti-Christian persecutions and demonstrate the growth and struggles of the early Church during a time of intense external political pressure.
Based on the translation originally published as part of The Ante-Nicene Fathers [1885], this new edition includes a new introduction, updated commentary, an updated bibliography, and several new appendices including "The Quotable Cyprian".