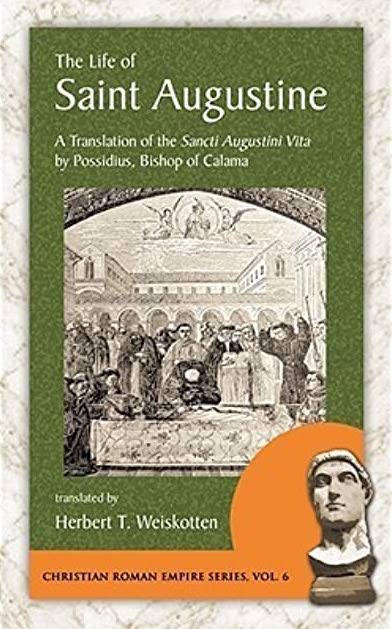 The Life of Saint Augustine
A Translation of the Sancti Augustini Vita by Possidius, Bishop of Calama
Herbert T. Weiskotten, translator (1919)

Few figures from antiquity are as well known to us as Augustine of Hippo. Thanks to his Confessions, we know a great deal about Augustine’s life prior to his conversion to Christianity. Yet, without this little biography written by his intimate friend Possidius, bishop of Calama, we would know comparatively little about Augustine’s life after his baptism.
In straight-forward, unadorned prose, Possidius shows Augustine as a powerful intellect, voluminous writer, and compelling orator, willing and able to defend the Church against all comers be they pagans, Donatists, Arians or Manichaeans. But he also presents an Augustine who humbly endured the everyday trials and difficulties of life as a bishop in Roman Africa. He shows a man who ate sparingly, worked tirelessly, despised gossip, shunned the temptations of the flesh, and exercised prudence and frugality in the financial stewardship of his see.
Possidius also supplies one of the only first-hand descriptions of the great tragedy of Augustine’s life—the Vandalic conquest of Roman Africa. He poignantly describes Augustine's final illness as he lay locked inside Hippo Regius with the barbarian host literally at the city gates.
More than simply the biography of a great saint, The Life of Saint Augustine provides a tantalizing glimpse into life in late Roman Africa—a prosperous society on the verge of destruction.
This edition of Weiskotten's translation has been completely re-typeset for the modern reader. The text has been amended to include several corrections from an errata sheet that accompanied the original publication. It includes an expanded bibliography, updated citations, and a revised map. (Note: this edition does not include Weiskotten's revised Latin text.)