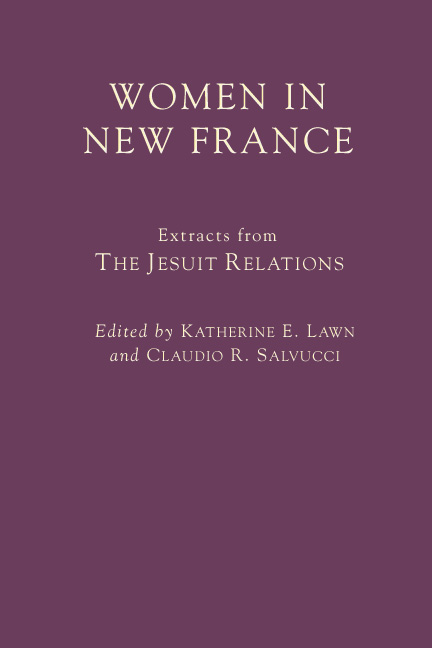 Compiled and edited by Katherine Lawn and Claudio R. Salvucci

Volume 5 presents extracts from the Jesuit Relations that record first-hand observations made by the Jesuit fathers in New France regarding the roles, traditions, words, and actions of both Native American and colonial European women from 1634 to 1790. Together, these extracts present a vivid, poignant, and emotional portrait of the lives and deaths of women in early colonial North America.
To best illustrate the differing roles and changing circumstances affecting women in this historical setting, the extracts are organized chronologically according to tribal, ethnic, and settlement groupings. Covered in detail are the Montagnais, the various Algonquin nations, the Hurons, Iroquois and Iroquoian-speaking nations (Petun, Neutrals, Eries, and Wenro). Extracts covering the tribes of the lower Mississippi (Houmas, Chickasaw, Natchez, etc.) and the plains (Sioux and Akensas) are also included. Finally, several chapters include extracts dealing with the lives of colonial French women, Catholic nuns, and both native and European women’s lives in the mission towns.
An introduction written by the editors helps place the extracts in their historical and cultural context and a bibliography of related reading is included. A map of tribal territories and movements from 1600–1700 is provided, as well as an index of principle persons mentioned in the extracts.