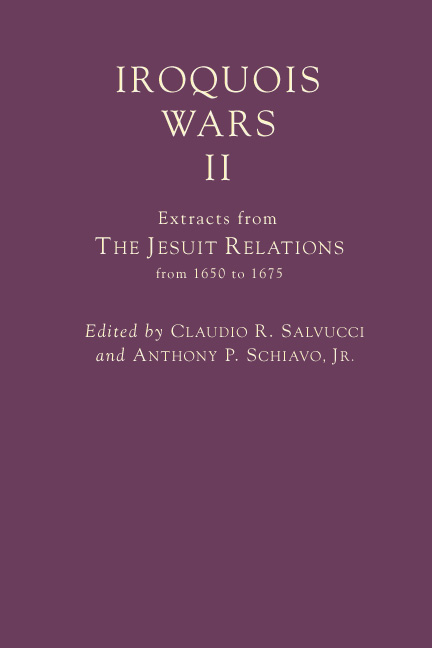 Extracts from the Jesuit Relations and Other Primary Sources

Iroquois Wars II continues the chronicle of the rise of the Iroquois Confederacy during the “Beaver Wars” of the 17th century, using primary source extracts from the Jesuit Relations. The accounts included in this volume cover the incredible series of victories won by the Iroquois over neighboring tribes following the defeat and collapse of their Huron enemies in 1650. Iroquois war parties fought wide-ranging campaigns against enemy tribes and Europeans alike in practically every state east of the Mississippi. In doing so, they destroyed or displaced dozens of tribes, many of which are known to history by their names alone. Extracts covering the stunning defeat of the Neutral confederacy in the 1650s and of the long war with the Susquehannocks (Andaste) are prominently featured. Several detailed extracts covering the dramatic war between the Iroquois and the Eries are also included, along with numerous accounts of the French invasions of Iroquoia in the 1660s and attempts to forge a lasting peace.
An introduction written by the editors helps place the extracts in their historical context and provides a list of further reading material. Each individual extract is properly cited for easy referencing within the Jesuit Relations, allowing the book to be used as a companion to the Relations or as a stand-alone reference. Six original campaign maps are provided, as well as three helpful appendices:

Appendix A - A detailed chronology of events from 1650–1675;
Appendix B - A synonymy of obscure tribal names contained in the volume;
Appendix C - Nearly 50 brief biographies of individuals (French governors, native chiefs, and missionaries) mentioned prominently in the extracts.